At the beginning of the banquet, speeches were given by Chairman Asada, Mr. Paul Madden, Ambassador of the U.K. to Japan, and Mr. Shin Hosaka, Director-General of the Trade and Economic Cooperation Bureau at Japan's Ministry of Economy, Trade and Industry (METI). While their speeches touched on themes like the activities of the BMC, Brexit, Japan-U.K. FTA negotiations, coming plans for the Emperor and Empress of Japan to visit the U.K., and the Japan-U.K. Exchange Year, they also talked about their respective ambitions for the further strengthening of Japan-U.K. relations. Afterwards, Mr. Kenji Miyahara, Honorary Adviser at Sumitomo Corporation and former Chairman of the BMC, gave a toast.

Roughly 180 people attended the banquet, which was a pleasant affair with a friendly atmosphere from start to finish. 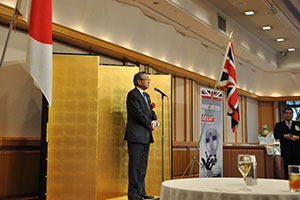 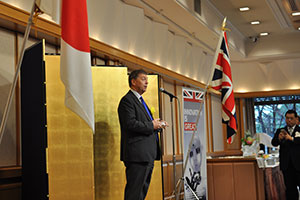 An address from Ambassador Madden. 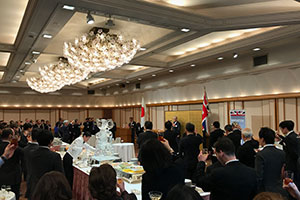 The toast at the banquet.
BACK
PAGE TOP ▲
British Market Council